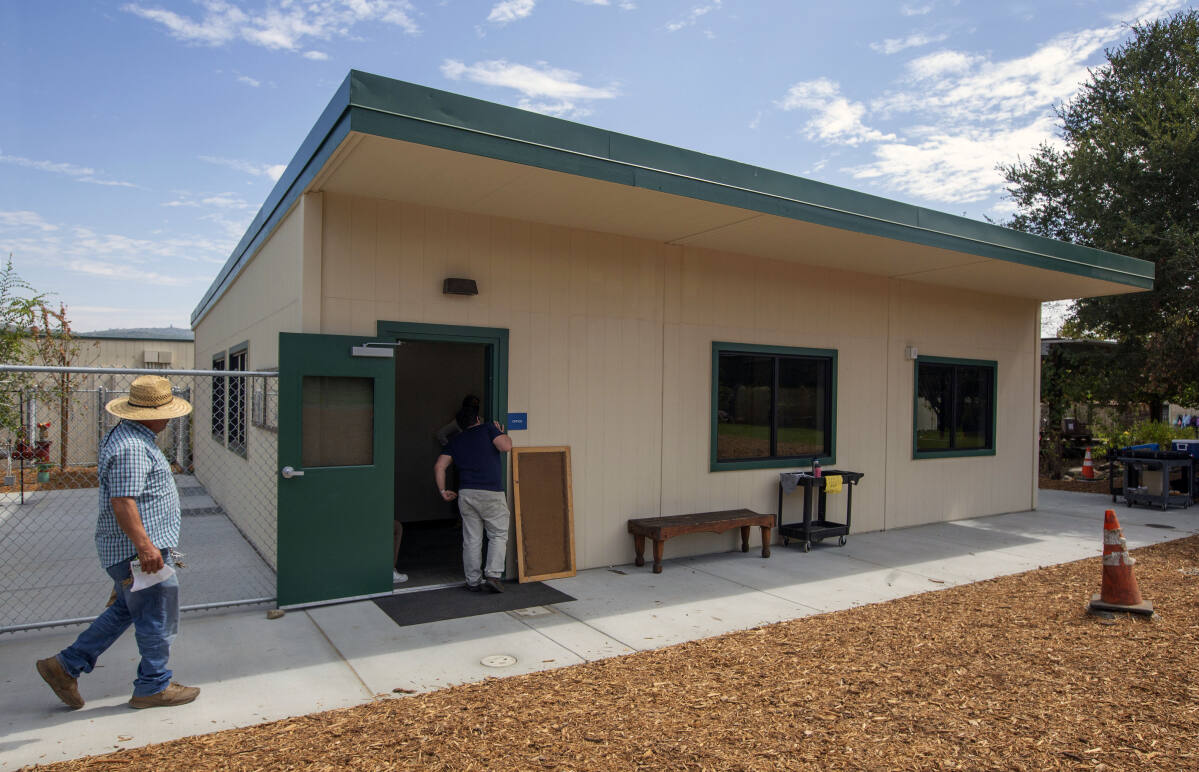 A project that includes construction of a new multipurpose room at Woodland Star Charter School has been put on hold as the Sonoma Valley Unified School District reviews its funding priorities.

“First, to be clear, the project has not been cancelled,” Superintendent Dr. Adrian Palazuelos said. “It has been temporarily suspended while the district conducts an assessment and considers how best to execute the remainder of the district’s Measure E bond program projects. These decisions will be made as quickly as possible, with communications on this matter being provided directly to Woodland Star Executive Director, Caroline Hopewell.

The modernization of Woodland Star was to be completed in August. The plans called for the demolition and replacement of the old administration building with a building with a new multi-purpose hall.

The first phase of construction included upgrading the school’s fire system, replacing a ramp to a classroom, providing a new front fence to make room for the new multipurpose building, the reconfiguration of the drop-off and pick-up lanes and the creation of a new parking area where the rear garden was located.

“Much of the phase one construction was designed to make room for the new hall (multipurpose hall),” Hopewell said. “We are waiting for the second phase, which is mainly (the creation of) the multipurpose building, which will have additional bathrooms for students, a heated kitchen and flexible space for large meetings, events and shows. school-wide. It will also house our music and crafts programs.

“The main hall (multipurpose hall) is the heart of our school community and without it we struggle to come together as a whole community,” she said. “We see bringing our community together as essential.”

The multipurpose room in the old administration building was also used as a classroom for music and crafts, which are now located in what should be a science and woodworking craft room at the school .

In addition, the building was used for lunch distribution, recess, and movement classes during inclement weather and bad air days. Plays, a Waldorf school tradition, were also performed in the hall.

SVUSD plans to provide short-term replacement facilities, as needed, at the school, which is adjacent to Altimira Middle School.

She added that Woodland Star has been allowed to hold its board meetings at the district office once a month.

The Woodland Star upgrade is expected to cost $8.7 million, down from the originally estimated $6.4 million and the currently budgeted $8.2 million.

SVUSD received $120 million from the Measure E school bond issue, which is used to fund the Woodland Star project and several others, but at the June 21 board meeting, Associate Superintendent Bruce Abbott said projected costs exceeded funding by $463,000. .

At the same meeting, Palazuelos expressed concern about construction costs and the decreasing availability of skilled labor.

“At a time of significantly rising construction costs and rising inflation, the District is doing its best to determine the best course of action to meet its facility needs and fulfill its obligations to the community under the Measure E bond,” Palazuelos said Monday.

The remaining projects resulting from Measure E funding are the Sonoma Valley High School Aquatic Complex, slated for completion in October; the modernization of the multi-purpose hall at Prestwood Primary School, which is expected to be completed by spring 2023; a new multi-purpose hall, playground and courtyard at Sassarini Primary School, to be completed by summer 2023; and a science wing at Sonoma Valley High School, to be added by summer 2024.

At the June 21 meeting, the SVUSD Board of Directors voted to go ahead with the improvements at Sassarini Elementary School, even though it will cost about $9.4 million more than the project. more modest originally proposed.

“I’m definitely in favor of Sassarini having a new facility,” Ching said during the meeting. “I think it’s really important. But I think it’s very irresponsible of us to go ahead with such a big investment project that has such escalating costs when we have so many unknown factors.

“We have not made any decisions or had any discussions about the ramifications of declining enrollment. [in the district] and I don’t want to assume any early conclusions about how this process of discussion and decision-making will unfold. I would be happy to put this project on hold while we write our strategic planning document.