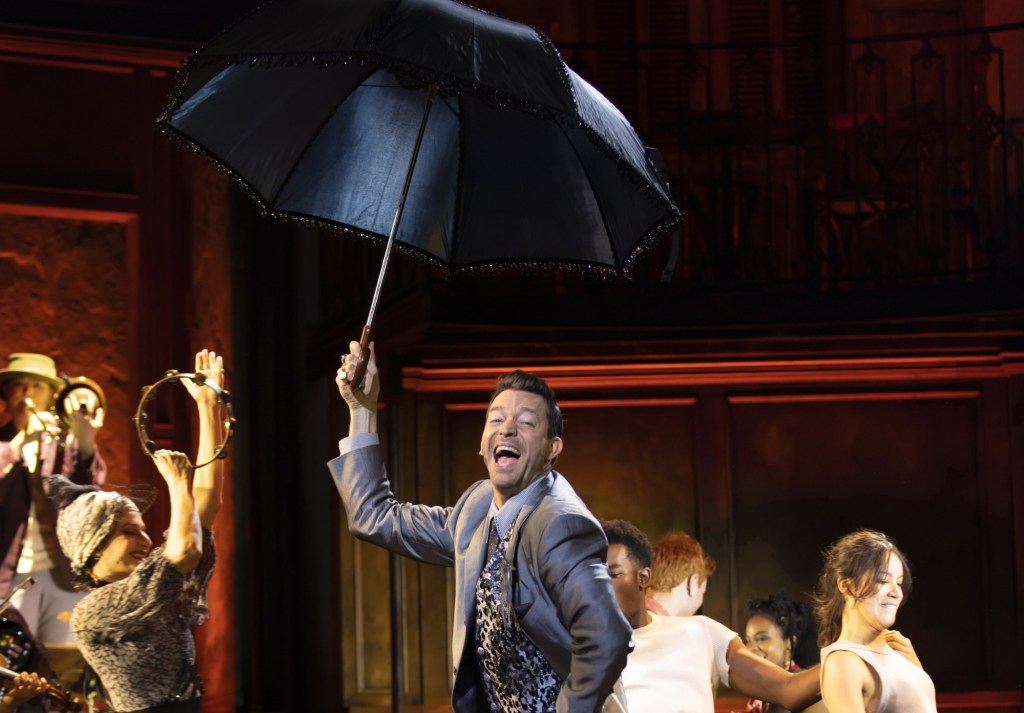 Levi Kreis had to go through hell to get to “Hadestown”

Long before lighting up San Francisco’s Orpheum Theater, where he played Hermes (the narrator) in a touring production of the Broadway hit “Hadestown,” Tennessee-born Levi Kreis was making his own gospel and country music. At the age of 12. Despite his talent, he says, he struggled to sign with a record label because he was openly gay.

However, Kreis went on and overcame protracted personal and professional hurdles — several years of gay conversion therapy, being expelled from his conservative college, violence against gay men, battling drug addiction — to begin a successful career as a musician and actor. . .

He got sober, continued to work on his music, and got his big break after winning a syndicated radio version of “The Apprentice.” Kreis has since released nine albums, which span genres such as piano pop, gospel, country, R&B and jazz. He is also a songwriter whose compositions have been featured in over a dozen popular movies and TV shows, and have cracked the Top 10 on several music charts.

He was also drawn to acting, and on the advice of his manager, Kreis auditioned for the role of Jerry Lee Lewis in Broadway’s “Million Dollar Quartet.” He got the role and won a Tony Award, as well as Drama Desk and Outer Critic’s Circle honors for the role. He also appeared in films such as “Fragility”, with Matthew McConaughey. Besides the “Hadestown” tour, Kreis will be on the road later this year with his annual Home for the Holidays concert tour. As for what comes after all of this, Levi hopes to continue sharing his story and may have something very special in the works…

The singer-songwriter and actor opened up to us about his career while on a break from work on “Hadestown.”

Q: How does being a music maker and composer yourself impact your work and experience as a performer of other people’s music? How do these fit together?

A: The link for me is to be an actor. Whether I’m slipping into a space I’ve birthed, a song I’ve written, or trying to experience someone else’s song or character, the things that make an interpretation honest, authentic and believable for one of them are qualities that one could refine and develop as an actor. For some reason, I always felt like it was all tied together for me, just to be able to understand a character’s emotional journey or the emotional journey that I was personally going through when I was writing something.

Q: You had to overcome a lot to get where you are, how would you say these experiences contribute to your work and your art?

A: It’s important for me to recognize that I spent the majority of my 20s being wooed by some of the biggest music moguls and major record labels, and generally found that when they discovered my sexuality, the marketing team didn’t know how to market someone who was openly gay. If I hadn’t been openly gay, in my twenties, in the 2000s, I probably would have gone further, and it was very difficult for me. I felt like no matter what I did, I could never express myself or make progress in my career, so that’s when I turned to being a independent artist and that I turned to the LGBTQ community to tell my story. These experiences gave me the determination to tell my story, no matter how many obstacles I encountered.

I no longer count on the yeses of others, because I never had them, and that always lights a fire under me. No one ever gave me this platform, I had to create it myself.

Q: You’ve been making music and honing your craft since a young age, if you had one message or advice to say to your child version, what would it be?

A: I would tell him there is no end point, careers come and go. Enjoy the journey, be true to who you are at all times, and know that the only person you have to please is yourself.

Q: You play the role of Hermes (the narrator) in “Hadestown” at the moment, what draws you personally to this character?

A: The first thing that attracted me to ‘Hadestown’ was the music of Anaïs Mitchell. As a product of the South, blues, soul, country, American music, it’s something that’s already in my DNA. On top of that, the character of Hermes leans more into the quarter of Americana that I grew up in, which is bluesy gospel and jazz, and so that was an added appeal. Then, the fact that he is a very particular type of showman. I seem to attract these roles, whether it’s preachers or Jerry Lee Lewis or whatever it is, I love stepping into these roles and bringing my own signature to them.

Q: Are there any other roles or characters that you really hope to play one day, or a general production that you would like to one day be a part of?

A I have always liked developing new works rather than falling into pre-existing pieces. There are so many remarkable roles being created right now in the privacy of writing rooms and studio workshops. Some of my favorite roles are roles that I’ve worked in studio and invested in, and haven’t quite done on Broadway, that the world may never see. That’s a hard question to answer, because I believe there’s so much good stuff in the works, that to boil it down to something…I just don’t want to!

Q: Could you see yourself writing a play or a musical?

A: It’s funny you ask me that, because I’ve been working on my own musical for 18 months. I think it’s going to be a nice fusion between my musical life and my acting life. It’s also a very unconventional way to tell an autobiographical story; we use a lot of theatrical tools that I think will be very new to people, but what excites me the most is that I’m very boldly tackling very difficult issues that affect the LGBTQ community, and I hope that this will be a very healing piece for many people in this community.

By Anaïs Mitchell, presented by BroadwaySF