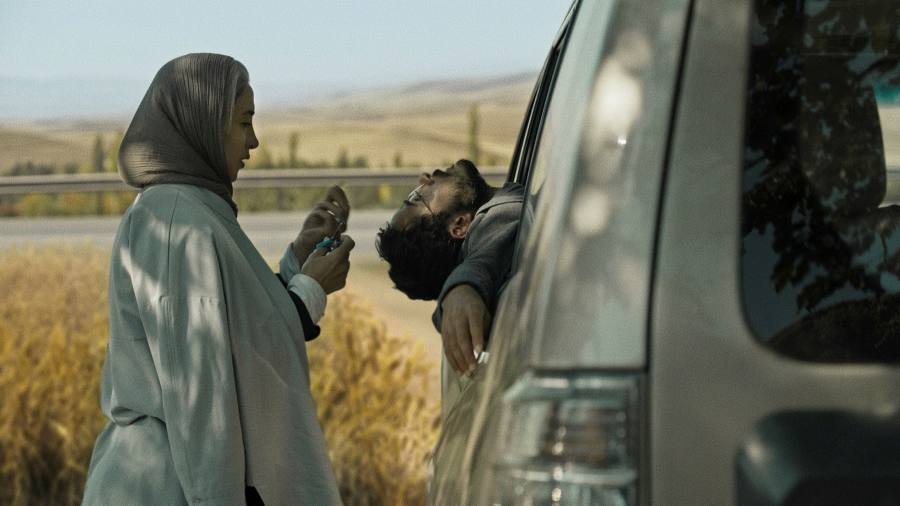 Iranian director Panah Panahi on Hit the Road: “I don’t feel like a filmmaker in my own country yet”

Different cultures have different angles on this perennial form, the road movie. In American cinema, getting on the asphalt traditionally consists of rediscovering a mythical spirit of the frontier; in France, it’s usually about getting as far away from Paris as possible. In Iran, too, road movies are likely to be about escapism – but that can simply mean escaping into the liberating privacy of a car, wherever that may be.

Take the road, the first film by Panah Panahi, son of the famous Iranian author Jafar Panahi, is an odyssey that defies any preconceived idea of ​​cinema in his country as being austere and trying. Although emerging from harsh social realities, it is an exciting, joyful and playful work; it even features a simple yet magical visual homage to 2001: A Space Odysseyfavorite film of the 38-year-old director.

Take the road follows a middle-class family of four en route to northwestern Iran, where the eldest son must leave the country illegally. En route, the family – including an irrepressible display of a six-year-old boy – exchange banter, get angry, sing Farsi pop songs and occasionally go out into the stark but beautiful scenery outside (the film was filmed near the borders with Turkey and Azerbaijan). Cars, Panahi told me over the phone from Paris through an interpreter, have a special place in Iranian culture.

“In Iranian families, the first thing people aspire to buy is a car, regardless of their financial situation. The car is a liberating private space, it makes you independent of the system. The rules are still enforced, but it is more difficult to monitor them, so a woman can loosen her headscarf, you can be with your girlfriend or boyfriend. It’s not just a cinematic idea, it’s a choice to have a freer lifestyle.

While Panahi chose the film’s English title for its echo of Ray Charles’ “Hit the Road Jack,” the original title, he says, “literally means an unpaved road. In Farsi, it has a double meaning: the “unpaved road” is the road you take when you are helpless, when you cannot do anything else. »

The story was inspired in part by Panahi’s sister, Solmaz, leaving for Paris; she had previously been arrested after starring in her father’s drama The circle (2000), a grim description of the problems facing women in Iran. His departure was not like the one shown in Take the roadsaid Panahi. “She left the country legally via the airport, but I remember the night she left. We were all pretending to be happy but we all knew she was leaving under difficult circumstances with no clear future ahead of her. I also had a very close friend who had this experience, with the car, with his family, just like it happens in my film.

The original idea, says Panahi, is a constant in contemporary Iran. “Among people my age, my friends and my family, everyone is thinking of leaving the country. Everyone has the right to enjoy a better life, and my generation doesn’t see that in the picture of our future.

The future of young Iran is somehow embodied in Take the road by its child star extraordinaire, six-year-old Rayan Sarlak, whose explosive, brash energy delivers a lively streak of outright comedy.

“I was very lucky with Rayan – he was the third child I interviewed. I kept thinking what a genius I had in front of me. While the film was tightly scripted, young Rayan was a joker bringing a touch of the unexpected: when he made an impromptu comment about a masked biker resembling Batman evil the scarecrow, he immediately entered the script. “Or when he starts dancing, his head out of the car,” Panahi says. “When we both practiced that, we started laughing, talking, telling each other stories, and then we started practicing dancing. The whole scene was the result of the two of us doing it together.

The film’s on-board musical entertainment includes several Iranian pop songs from the pre-revolutionary era – fiery romantic ballads with a delirious rhythmic swing. “After the revolution [in 1979], we had so many restrictions on music and singing – that’s why on road trips people listen to pre-revolutionary music, songs performed by artists who had to flee the country. Despite the cheerful music, the meaning of the words is quite sad. These songs are loved across generations, perhaps because of this paradox.

Although Panahi has worked on his father Jafar’s films before, most recently as an editor, he says his own film is entirely different. Panahi senior is best known for his stories (crimson gold, Off-side) on the disadvantaged and oppressed people of Iran, a concern stemming from his own working-class background, Panahi says. “I grew up in a very comfortable situation, my friends never had financial problems, we lived in the city center – so I have different concerns, I talk about different things.”

For many years Jafar, an outspoken social commentator, faced hostility from the government. In 2010, the authorities banned him from making films for 20 years, but he continued to work nonetheless, sometimes in ingenious ways: notably in his visual house arrest diary, cheekily titled This is not a movie. Now, three days before I spoke to Panahi, news has come that Jafar has been arrested again, this time after inquiring about fellow filmmakers Mohammad Rasoulof and Mostafa Al-Ahmad, themselves detained after protesting against the brutal police.

Panahi only learned of the arrest after arriving in Paris and is trying to put a brave face on it. “I know how my father is, even in difficult situations. He was so bored sitting at home doing nothing. Now he is somewhere where he can find many ideas for his next movies.

As for Panahi junior, if he received the official authorization to make his film, he could not project it in Iran. Celebrated around the world since its Cannes premiere last year, Take the road remains both invisible and largely ignored at home. “Not only is the government not recognizing its success, even movie websites are not mentioning the film. Even my actors haven’t seen it yet. I don’t feel like a filmmaker yet in my own country. Yet, rather than become a director in exile, Panahi is determined to continue working in Iran. “My soul is attached to this country,” he said.

However, a few days after our conversation, another news arrives: it is announced that Jafar has been sentenced to six years in prison. Panahi had spoken confidently about moving forward with her next film, but for now, it looks like her family will have their hands full fighting for justice.

In UK cinemas from July 29