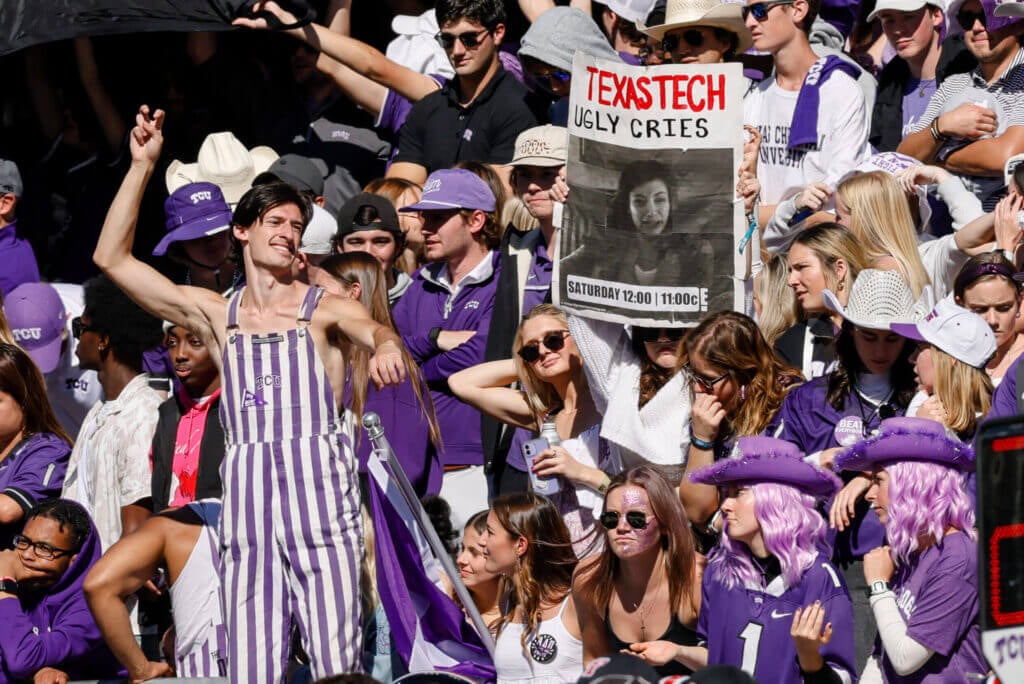 Crazy Frogs: Inside the wild videos that made TCU the internet’s new favorite team

Jon Petrie thought the first video would never see the light of day beyond his office. TCU was preparing to take on Oklahoma State in a clash of Top 15 teams that would do much to help shape the Big 12 title race.

It started with a fitting soundtrack of “Crazy Frog,” a techno-inspired re-working of the Beverly Hills Cop theme song that caught fire on the internet over a decade ago when paired with images. a mascot for a small ringtone company. (Yes, this story goes even further down the Internet rabbit hole.)

“What if I just took this song and combined a bunch of weird images of frogs and edited them together in a really weird way with no rhyme or reason,” Petrie said. “It’s very abstract and fluid.”

He did just that, snapping quick cuts of various internet memes interspersed with a parade of photos and videos of frogs from different levels of reality. At one point he found himself googling “psychedelic backgrounds”. He just thought it would be funny.

Following TCU’s 43-40 double overtime win, he added some footage of the TCU team celebrating in the locker room.

“We kind of encouraged him, and he kind of looked to me like, ‘Really? Do you want to post this?’ I was like, ‘Fuck you, why not? We just beat Oklahoma State. Let’s post it.’ And sure enough, it blew up,” said Jason Andrews, director of creative media for football at TCU.

Licking toads can be dangerous to your health and is generally frowned upon by the medical community, but if the supposed effects are real, it would probably be a lot like watching the end result of Petrie’s work, 54 seconds of pure joy.

Fun is one of the new words that defined TCU’s schedule under Sonny Dykes. The the face of the program personifies with his embrace of Hypnotoad, the Futurama character that the basketball program first used as a free throw distraction. Now, he has become the unofficial mascot and symbol of the football team’s 9-0 start and continuation of the College Football Playoff program’s first offer.

“The great thing about Coach Dykes is that he doesn’t micromanage at all. A lot of times he has no idea what we’re doing. He’s just a great CEO and hires people and lets them do their jobs” “, said Andrews, who spent four seasons with Dykes in a similar role at SMU before following him 40 miles through Interstate 30 to TCU. “It makes my job and my team’s job super easy, because that my team is super awesome and it gives us the flexibility to be creative and do things like these memes.”

This, together with TCU’s marketing of a Game of Thrones-style “House of Duggan” logo to promote star quarterback Max Duggan helped TCU become the internet’s new favorite team. No one expected a troubled start after Oklahoma State’s victory. No one was prepared for it, not TCU fans and certainly not the internet in general.

But it raised expectations for an encore. A parade of toads? Already passed. Petrie was brainstorming ideas when someone caught him in his office taking a 0.5 photo of himself.

“What are you doing?” they asked.

Petrie explained that a .5 photo is an extremely wide angle lens, but when a photo is taken near the photographer’s forehead, it makes their face look massive for a very strange effect. Petrie, a Maine native who worked as a creative for Maine’s 16 sports before joining Andrews’ team in Fort Worth in June, traded 0.5 selfies with his friends as a joke. Before long, TCU’s entire creative team was taking them on before they came across an idea.

“What if this week’s video was just the 0.5 photos you take? asked a staff member.

“You mean just take a bunch of 0.5 photos of the players and put them together?” said Petrie.

Petrie thought about it for a moment before replying, “That would actually work.”

And so, gotfrogged.mov was born, featuring a deafening rendition of Disturbed’s “Down With The Sickness” as the soundtrack.

“I know players like them because they always ask, ‘What’s the video this week?’ and I have to tell them, “I don’t know yet,” Petrie said.

He didn’t get the full idea of ​​the West Virginia video until he had a stroke of genius in the 11th hour.

“I did this in the hotel room the night before and it took me about an hour. I spent an hour looking for frogs in cowboy hats and then downloading them, but I I ran out of photos, so I had to figure out how fast I could photoshop frog heads onto cowboys,” Petrie said.

Petrie and Andrews can’t help but laugh at the runaway popularity of a project that Andrew doesn’t spend time working on and Petrie barely spends one percent of his seven-day workweek during the season assembling. Andrews oversees all content, but they both help produce Carter Boys, an in-depth, weekly in-house documentary chronicling an already special season in Funkytown, fittingly airing on ESPN-plus.

“You get all these people commenting, ‘Hey, I’m not even a TCU fan, but I’m starting to shoot for these guys because of this. And you realize, ‘OK, you’re doing something right.’ But at the same time, it kinda pisses me off because we do all this really cool stuff. Cinematic, pretty, but that’s what grabs the attention,” Andrews said with a laugh. “But it is okay.”

Petrie was able to dip his toe into the mix of psychosis and cinema with his Texas Tech video celebration, thanks to a spicy offseason between the former Southwest Conference rivals who have renewed their hatred in the state since TCU joined the Big 12 a decade ago.

Using Dwight Yoakam’s “1,000 Miles From Nowhere” was a layup to polish TCU’s rival in rural West Texas, with a mock Raider Red taking a big bite out of the cactus. It was, predictably, a cacti-filled video to poke fun at the Red Raiders.

Texas Tech announced a NIL deal that included 100 annual, $25,000 contracts for football players, but TCU recruiting coordinator Bryan Carrington lit up a game criticizing the deal and Tech’s efforts to help players to build their brand “in a desert”. He punctuated the tweet with a cactus, but Texas Tech fans repurposed the emoji as the program’s new unofficial symbol. Even Patrick Mahomes tweeted the emoji. At halftime of Saturday’s game, the Texas Tech band formed a cactus as they performed.

So TCU’s postgame was a fitting rebuttal. So was an alternate video that Carrington also posted from the creative department.

It was a piece of savagery rarely seen in sports, pouring salt into Red Raiders injuries as TCU focused on a possible future in the Playoffs.

This week, Petrie has already found her inspiration. If TCU beats Texas as a touchdown underdog in Austin, their new video will see the light of day. It will feature a repurposed iconic Longhorns logo.

Winning is fun. But so does Petrie and Andrews’ work as the internet arm of Dykes’ rebuilt TCU program, which prides itself on being open and having a free-wheeling attitude. Why shouldn’t the creative department do the same?

“Jason would come and say, ‘How did you find that? ‘” Petrie said. “And I should be like, ‘I don’t know, it’s just kind of like jazz. You’re just improvising.

“You gotta love it when you see people say, ‘I wasn’t a Frog fan until I saw this.’ And you realize, ‘Oh, we’re gaining fans,'” Petrie said.